A new report from the Global Alliance for Trade Facilitation looks at how better trade facilitation can improve inclusive economic development. 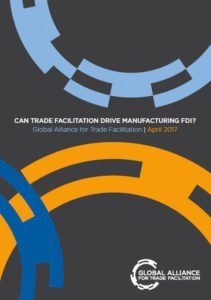 While FDI played a starring role in East Asia’s manufacturing success story in the 1980s and 1990s, investment remains concentrated in Southeast Asia and larger emerging economies—largely keeping Africa, for instance, from sharing in its spoils. As a new report from the Global Alliance for Trade Facilitation points out, only 5% of Sub-Saharan Africa’s FDI goes to the manufacturing sector. As many countries that have missed out on manufacturing FDI also tend to have higher trade costs and weak trade facilitation environments, the report analyses the relationship between these elements and delivers a powerful conclusion.

In recent years, world trade has seen complex global value chains multiply, where a country may specialise in manufacturing a single component of a multinational company’s final product, such as the screen on your smartphone, for example. Manufacturing FDI can act as a strong job creator by supporting economies’ integration into global value chains.

So what does manufacturing FDI have to do with trade facilitation? In order for a production line spread across continents to function, smooth and predictable cross-border trade is essential. Trade facilitation refers to processes aimed at clearing goods across borders as quickly and predictably as possible, e.g. speeding up customs clearance or making customs procedures  more transparent.

“Although a number of factors drive investment decisions, the ability to move goods across borders efficiently and predictably is one of the most vital,” said Alliance Director Philippe Isler.