Governments are making slow progress in improving the efficiency of customs and border procedures – with many small businesses and entrepreneurs cut off from the global trading system as a result. This is a central finding of the World Economic Forum’s Global Enabling Trade Report, issued today in conjunction with the Global Alliance for Trade Facilitation.
​ 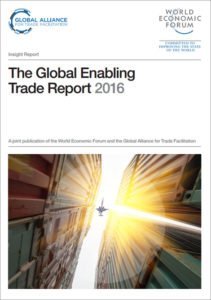 Governments are making slow progress in improving the efficiency of customs and border procedures – with many small businesses and entrepreneurs cut off from the global trading system as a result. This is a central finding of the World Economic Forum’s Global Enabling Trade Report, issued this year in conjunction with the Global Alliance for Trade Facilitation, a new public-private partnership to support trade-led development.

At a time of growing scepticism towards many bilateral and regional trade agreements focused on cutting tariffs and harmonizing product regulations, the report shows that improving the efficiency of border administration is a largely untapped tool that governments can use to boost economic growth. The biggest beneficiaries of customs reforms are small and medium-sized companies (SMEs) which typically lack the resources to comply with complex, expensive or time-consuming measures.

“Businesses and entrepreneurs in many developing and emerging economies are being constrained from the global marketplace due to costly and inefficient border processes. Governments must consider trade facilitation reforms as a strategic priority to make trade work for all,”  said Philippe Isler, Director of the Global Alliance for Trade Facilitation.

Produced every two years, the report is a benchmark for governments looking to boost growth and development through trade. With regard to border administration – one of seven pillars that 136 economies are assessed on – the report captures the efficiency, transparency and expense associated with importing and exporting goods. In doing so, the report looks at the quality of key customs services, such as the cost and number of documents to import and export goods as well as the time predictability and transparency of procedures.

The report shows that no convergence between countries on border administration has been achieved in the last two years — and, in fact, the performance gap between high and low-income economies has even widened slightly during this period, by 0.1 points on a 1-7 scale. Among the report’s seven pillars, border administration exhibits the second largest score differential – between top performer Singapore and the bottom country, Yemen.

Countries’ performance on border administration is strongly correlated with the level of development but there are several bright exceptions in Sub-Saharan Africa, with landlocked countries such as Botswana and Rwanda jumping ahead of South Africa in their regional rankings. In contrast, most commodity-rich counties underperformed their income group in border administration.

The report’s findings come at a time when the World Trade Organization’s (WTO) Trade Facilitation Agreement (TFA) – the first multilateral trade deal since the establishment of the WTO 20 years ago – is on the cusp of entering into force. Agreed in a landmark 2013 negotiating round, the TFA aims to speed up customs procedures by making border measures more transparent and predictable; reducing bureaucracy and corruption; and taking advantage of new technologies.

According to the WTO, the TFA could reduce trade costs by an average of 14.3% and have a bigger impact on international trade than the elimination of all the world’s remaining tariffs. The projected benefits of the TFA are greatest in developing and emerging countries and research by the World Economic Forum suggests TFA implementation could trigger a 60% to 80% increase in cross-border SME sales in some economies. The deal is expected to enter into force in early 2017.

“The TFA is a major opportunity to make trade easier,” said Philippe Isler. “Governments should work with the private sector to make sure border reforms have a tangible impact on business’ ability to trade internationally.”

Launched to assist developing and emerging countries and speed implementation of the TFA, the Global Alliance for Trade Facilitation leverages business expertise, resources and leadership to support effective trade facilitation reforms measured by real-world business metrics. Alliance projects are currently being rolled out in Colombia, Ghana, Kenya and Viet Nam.

Measuring trade facilitation is currently limited by the extent to which border administration reforms that are on the books are effectively enforced, according to the Global Enabling Trade Report. The Alliance seeks to fill this gap between the de jure and the de facto through its metrics work, of which this report is part.