The Global Alliance for Trade Facilitation has undergone a process to gender sensitise its work helping countries to implement the World Trade Organization’s Trade Facilitation Agreement (TFA). This paper summarises the lessons learned by the Alliance in building its gender mainstreaming approach and provides new insights on the nexus between gender and trade facilitation.

There is growing acknowledge 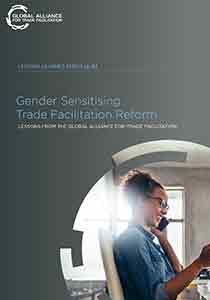 ment that trade reform is not gender neutral, thus specific action must be taken to ensure that neither women nor men are negatively impacted by trade facilitation programmes. In particular, women and men are uniquely affected by trade due to the different roles they play in society as producers, consumers, business owners and traders. Recognising this, the Global Alliance for Trade Facilitation (the Alliance) has undergone a process to gender sensitise its work helping countries to implement the World Trade Organization’s Trade Facilitation Agreement (TFA). This paper summarises the lessons learned by the Alliance in building its gender mainstreaming approach and provides new insights on the nexus between gender and trade facilitation.

Gender mainstreaming can be realised in trade facilitation programmes through the following actions: conducting a gender analysis on the roles that women and men play in the country and sector of interest, facilitating gender planning to identify any gender objectives of the project, and monitoring and evaluating the gender components. This ensures the different roles played by men and women are clarified, and that these roles are assessed according to how they may be differentially impacted by trade facilitation reform.

Referencing the best practices of other organisations, the Alliance has introduced Gender Mainstreaming Guidelines to provide a tailored approach to gender sensitising its projects. In addition, the Alliance is equipping staff to implement the guidelines through gender training, is providing gender mainstreamed project document templates, and adding gender-disaggregated indicators to its results frameworks. A full list of good practices identified through our research are available in Annex 1.

There are clear signs of progress that can be highlighted for other organisations to reference. These include strong engagement with women-owned businesses and women’s business associations, holding separate and specific public-private dialogues (PPD) on gender and trade facilitation, and using the findings of gender-sensitive PPDs to inform project design. Further, Alliance projects have intentionally targeted sectors that are likely to have a positive impact on women, such as agriculture, and the Alliance has built partnerships with organisations such as the Organization of Women in International Trade (OWIT).

In addition, our research has identified several key success factors to successfully implementing gender mainstreaming. For example, having the support of upper management helps to build a culture where gender is prioritised. Additionally, having gender-balanced teams helps to send a strong message while also ensuring that gender activities can be thoroughly carried out, especially when all-women consultations are culturally appropriate.

The next frontier of gender mainstreaming in the Alliance includes three major activities. First, in 2020 the Alliance has been piloting the new gender approach. Second, the Alliance is focusing on measuring its gender impact through building a baseline, setting targets and measuring against those targets. Third, the Alliance is continuing to share knowledge gained on gender and trade facilitation. Sharing of best practices and lessons learned can help the trade community to collectively gender sensitise trade reform and ensure that trade contributes to women’s economic empowerment.