Representatives from the Ministry of Industry, Investment, Commerce and Digital Economy and the Global Alliance for Trade Facilitation, in the presence of Agence Nationale des Ports (ANP), the Office National de Sécurité Sanitaire des Produits Alimentaires (ONSSA), the Embassy of Germany in Rabat, and other project partners, today signed an agreement to implement a new trade facilitation project with the aim of automating certain import and export processes in line with the World Trade Organization’s Trade Facilitation Agreement.

The project, which aims to optimise import and export processes in Morocco’s agri-food sector was developed through public-private consultation. The project is designed to reduce transaction time and costs for agri-food products by developing and implementing digital tools to improve processes that have up to now been paper-based.

The Global Alliance for Trade Facilitation, which is supporting the project, is a not-for-profit venture which brings together governments and businesses as equal partners to identify opportunities to improve trade facilitation. The Alliance believes that international trade should be simpler, faster and more cost-effective, creating new business opportunities, enabling greater economic and social development and reducing poverty. Its work is designed to help governments in developing and least developed countries implement the World Trade Organization’s Trade Facilitation Agreement through working with public and private sectors as equal partners to identify barriers to trade and implement targeted reforms with tangible results, such as reducing delays at borders and removing unnecessary red tape. 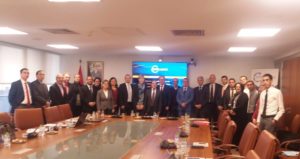 Philippe Isler, the Alliance’s Director, said: “Through trade facilitation we can make more trade happen, simply by making trade easier. This project is the result of business and government working together to identify bottlenecks and to jointly develop the solutions, and will be an example of best practice for further trade facilitation efforts in Morocco and across Africa.”